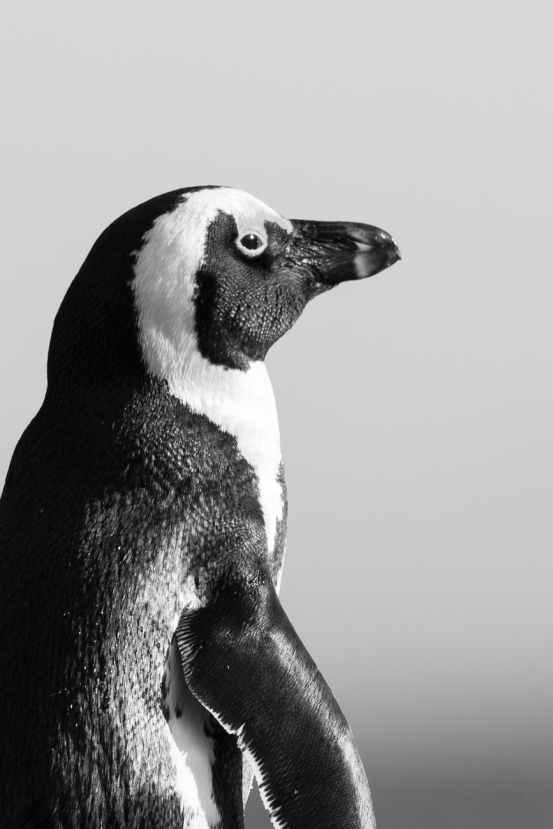 (image of a black and white penguin from fairly close up, I’ve no idea what kind, looking to the right.)

The Christmas that I was seven, my grandmother gave me underwear and I cried.

She was a practical person; she had asked my mother what I needed, then gone out and bought it. The problem arose when I opened the gift in front of 25 or so varied relatives and was thus exposed as, horror of horrors, the most embarrassing thing in the world, a person who wore underwear. My reaction was overblown of course; the majority of people in the world wear underwear, and there was no reason for me to be ashamed over a gift that I had had no part in choosing. Yet I was humiliated, because a part of me had not actualized the body positivity that my parents taught, and I felt that some parts of my body were shameful and should not be acknowledged, nor should anything to do with these private parts be acknowledged. Thus, the shame. Thus, the tears and the running away.

Many years later, in October 2019, I received a gift that was as practical, yet as unwanted and embarrassing as that long-ago underwear was. This gift came in the form of a letter, a letter that I had been expecting, because it was a gift I had asked for, had pursued, had sought to be the recipient of, for months. The gift – for it was a gift, albeit one I was entitled to by virtue of my autism – came from the state, and it was a notice that I had qualified for services from the states Department of developmental disabilities, or DDS.

I got the letter, and I called my mother and told her the good news, because this was something that she had wanted for me. She is getting older, and it has become apparent to both of us that I will never be able to take over the executive functioning tasks which she has long done for me. My mother was happy, because she felt that my future without her would now be more secure. My mother was happy, and so was I, but I still hung up the phone and cried.

DDS. It’s three innocuous syllables, three letters which accurately describe a part of the government whose explicit mission is to help people like me, those with developmental disabilities. This includes autism, because of course it does, why wouldn’t it? Well, perhaps my reaction would be better understood if people knew that until 2009, the department was not DDS. It was DMR, as in, the Department of Mental Retardation. And it was only in 2014 when a bill was passed allowing autistic people to get services even if their IQ was above 70. Because of this bill, I now receive some funding for help in living my life to the fullest. Yet even as I write these words, a part of me resents the fact that I need this help at all.

I have studied history, I have learned and relearned things about the early days of this country that we call the United States. I know that when people talk about early Americans being self-made men, what they really mean is that they were white, nondisabled men who actually got quite a bit of help from the government, whether it was free land in the 1800s or free college with the G.I. grant in the later part of the 20th century. I know that while I was born with many privileges, such as being white, upper-middle-class, and cis, I was also born with developmental disabilities that no amount of hard work will ever allow me to overcome. I know that the government, no matter how generous my particular state is, is a miser, and that I would not get services which experts had not determined me to be fully eligible for. This eligibility was based on diagnoses from doctors who had no reason to lie, based on tests that I took as an adult and my extensive medical and educational records.

Yet still, I cried when I got the news of my eligibility. I cried, and I finally understood what it means when nondisabled parents say that they mourned at the birth of their disabled child, not for this particular child, but for the nondisabled child who would never be. In response to this, disabled people say that this is wrong, that we should not be mourned, that there is nothing missing, and mourning is for the dead while we are living.

And I do not, I did not, deny this. I am a full person and I live a full life. But what is also true is that I grew up thinking that I was nondisabled and that some point, I would, in fact, catch up with my peers and be just like everybody else. That never happened. Instead, my neurodiverse brain grew, and I grew, in neurodiverse ways, and I picked up the mental illnesses and chronic pain that often accompanies the genetic quirk of autism, and the rift between myself and my nondisabled peers grew over the years until it widened, turning from a trickle to a stream to a river to a gulf.

Social Security disability is for lots of people. State health insurance is for lots of people, too. DDS services are not for lots of people. I know many autistic people who would never qualify for DDS. But through some combination of my mother’s advocacy, my advocacy, and being born to a white family fluent in English in addition to quite a lot of testing, interviews and medical records, I did qualify. I did get the services that I need. But just because I need them…doesn’t mean that I want them.

Inside of the deepest part of my brain that is my soul, a war rages. I am fighting against every expectation and every person who has ever told me that if I just bothered to actually try once in a while, I could hold down a real job. I could do what everybody else in my family is doing, namely, succeeding. I am fighting back against this with the knowledge that I have inherent worth and dignity just because I am a human being. I am fighting back with the love and history of my disabled brethren behind me. But the dichotomy is jarring and my grief is jarring and I feel like a wisp, like a wind, like a failure, like a triumph, like a penguin in a room full of birds and a dolphin told it is a mammal and the liminal state of my existence is especially tenuous just now, and it may be for a while yet.

I am lucky. In almost any other state, I would not receive any of the excellent services that I do. In almost any other state, I would not have gotten access to the mental health specialists who have helped me to start to heal from the wounds and shame of my past, to the pain specialists who enable me to rise each day again, to the disabled, liberal, queer community that intersects and entwines me and holds me safe and sits at my table on Thanksgiving. In any other state, I would not have had the opportunity to know as many people with intellectual disabilities as I do, who have taught me that it really isn’t the thought that counts at all – it is the love. That the r-word may be scary but the people aren’t. That it really doesn’t matter if you can’t do anything you want, because what you can do is important enough.

But even dolphins cannot breathe water like fish can, no matter how at ease in the ocean depths they seem.

I am a person who wears underwear, and I am person with a developmental disability, and both of these things are okay. Only just as it took me years to laugh about the underwear incident, it will take time for me to accept needing help from DDS.  And there may be a part of me that never fully accepts that I am a client of theirs, just as there is a part of me that is horrified I am telling ‘the underwear story’ now. The dolphin mourns for their lost identity as a fish, and so do I. Please do not judge me for it. Only continue to do as you have done, and help me to create a world where everyone can live in their own way, whatever that way is, peacefully, together.

Note for any literal-minded readers, dolphins and penguins don’t actually mourn for any lost identities, they are metaphors.

Note for people who want to know exactly what services I receive: I am choosing to keep that mostly private at this time, however, I will say that this essay was written on computer equipment that the DDS office funded for me.